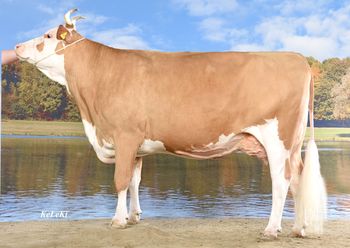 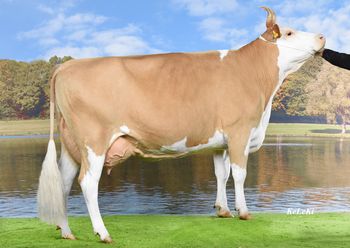 We are delighted that two bull-mothers from Swissgenetics have been voted cows of the year. In January 2017 the Simmental Pure Breeders annual general meeting voted Roman-daughter ARIEL from Gerber Thomas and Reto, Süderen, the winner by a clear margin.
The winner of the last Elite Show in Thun has further developed in her conformation and the udders meet all expectations. She has a new EX-93 linear classification. Her son ARIELO (V: Bueno) is being reared at Swissgenetics.

The other Roman-daughter LIVIA from Hansueli Aebersold, Beatenberg, has been just as successful. She was already voted cow of the year in 2016 at the SVS-Meeting and then in May followed up this huge success with the title Miss BEA at the Berne Elite Show in Berne. She has now also been voted cow of the year 2017 over all other milk breeds in the Schweizer Bauer reader competition. She is also a bull mother at Swissgenetics; her son is called LUTZ and originates from FLAVIO.

The two promising bull calves ARIELO and LUTZ were both born in autumn 2017 and are together in our rearing stable in Langnau near Reiden. We congratulate the two breeder families on the “Cow of the year” title and thank them for the great collaboration.
ROMAN is half-brother of the well-known bull RAFAELE.