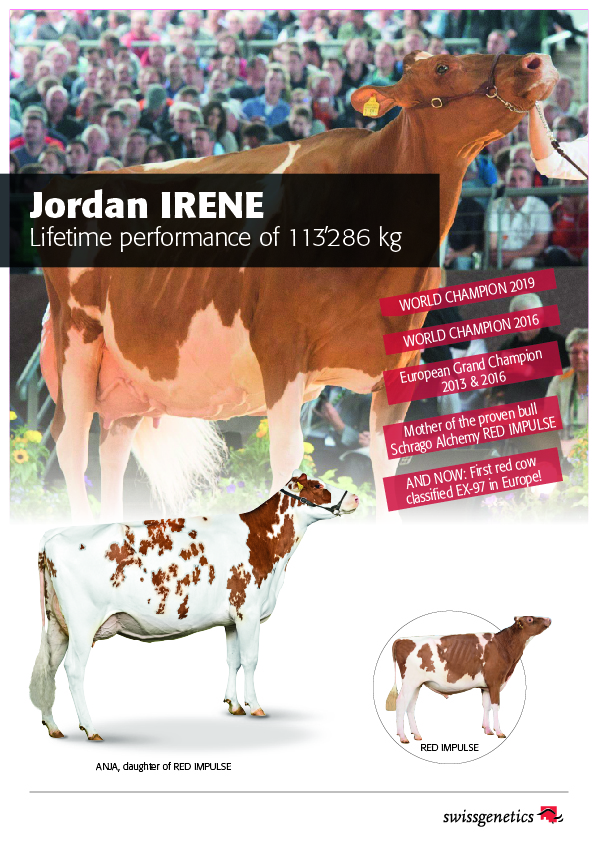 The queen of the show rings wins again: Suard-Red Jordan IRENE from brothers Schrago, Middes FR, has in 2019 once again been crowned Red Holstein world champion by trade journal Holstein International, following on from her win in 2016. She has already been RH-European champion twice in 2013 and 2016. That she has now won both titles twice is unique.

This is a further career highlight for the almost 15-year old cow from brothers Schrago, Middes FR, who now has a lifetime production of 113,286 kg milk with very positive components of 4.72% fat and 3.38% protein.

Jordan IRENE was also the first Red Holstein cow in Europe to obtain the EX-97 classification.

She is also a successful bull mother at Swissgenetics. Schrago Alchemy RED IMPULSE is no less than her best son who in the previous financial year 2018/2019 was also the best-selling RH bull from Swissgenetics. The positive daughter-proven Rh-bull continues to be available with conventional, sexed and with SpermVital doses in our standard offer.